Returning by Another Road 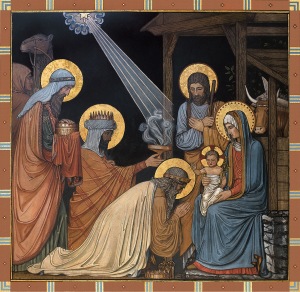 Yesterday — January 6 — began the season of Epiphany, whose heart is the story from Matthew’s Gospel about the three wise men who come from the  East, following a star, looking for the “king” whose birth they believe the star to announce.  They pay a visit to King Herod, believing that he would want to help them locate this newly-born king.  They are not at first aware of how threatening this news is to Herod, who asks that they let him know where they find Jesus, so that Herod can pay his respects, too (something, of course, which Herod has no intention of doing).  The wise men do, indeed, find the baby Jesus and give him their famous gifts.  At the conclusion of their visit, however, they “return home by another road”, having been warned that Herod’s intentions are anything but honorable.

This sweet story is usually interpreted as pointing symbolically to the significance of Jesus’ birth for people outside the Jewish community — for the wise men come “from the East”, meaning they are not Jews.  And much has been made of the symbolism of their gifts of gold, frankincense and myrrh.   Particularly of the myrrh, which was traditionally used in the anointing of bodies after death — and therefore is taken to be a foreshadowing of Jesus’ own death.

This year, I have found myself wondering about the symbolism of the rest of the story.  For me, the wise men strike me as pilgrims, as spiritual seekers who are wise enough to perceive that in Christ, God has come into the world in a new way.  And they recognize that this particular coming of God is something they need.  It is like a light — or a star — that draws them to Christ.  And so they make their pilgrimage, leaving their home and the land that is familiar to them to go to a strange place.  Part of their wisdom is that they are wise enough to know that they can’t stay home, they can’t simply remain in their comfort zone.

And so their encounter with Christ sets them on a new path.  They do return home, they go back to the familiar and comfortable, but they do so “by another road”.  The return home different than when they left.  They are not quite the same people.  They have allowed Christ into themselves, and they have begun to be recreated from within.

Some people, like Herod, cannot make this journey, because it is too scary.  Rather than seeing the beauty of allowing Christ to remake them, they see only the cost of that remaking.  They cannot let go of what must be surrendered in order to embrace the light.

As we make our way into Epiphany this year, may we see the invitation to open our hearts to Christ and allow ourselves to be remade not as threatening, but as reassuring.  May we see it as God’s movement toward us in love, as an opportunity to become the light we see in Jesus, and thereby to bring light to the world.